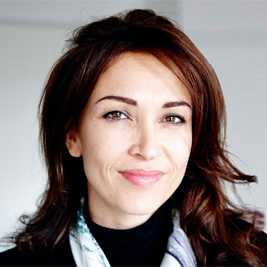 Founder, Chair, and CEO of Lysogene, Ms. Karen Pignet-Aiach is also the mother of a child with MPS IIIA. She has a strong business background starting her career with Arthur Andersen specializing in audit and transaction services. Her entrepreneurial experience includes founding and running a financial business consultancy. From 2008 to 2009, Ms. Pignet-Aiach served as a Member of the Paediatric Committee at the European Medicines Agency (EMA), established in accordance with the European Paediatric Regulation, as a patient representative. In 2008, she also served on the French Ethical Review Board CCPPRB at Ambroise Paré Hospital. Ms. Pignet-Aiach has been involved with several not-for-profit organizations engaged in advocacy and research in the field of rare diseases such as Alliance Sanfilippo and Eurordis, where she served on the board as treasurer from 2010 to 2011. She is a founding executive member of the International Rare Diseases Research Consortium (IRDiRC).

Ms. Pignet-Aiach graduated from the ESSEC Business School and majored in Economics from Institut d’Études Européennes of University Paris 8.